Difference between revisions of "Triskar2" 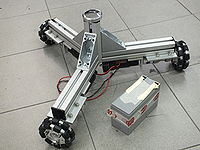 Triskar2 is a highly modular, omnidirectional base, developed after some years of experience with omnidirectional robots Triskar developed for the Milan Robocup Team playing in the Robocup competition up to 2010.

Triskar2 is modular both from the mechanical, the electronic, and the SW points of view.

From the electronics point of view, it adopts R2P, the modular architecture developed at AIRLab by Martino Migliavacca. Independent, low-cost, HW modules implement the single functionalities (such as motor control, communication, sensors,...) and it is connected to the others via a CAN bus, participating in a publish-subscribe architecture supported by the real-time operating system ChiBiOS. This means that interaction among modules is implemented in real-time. Modules include an ST Microelectronics ARM processor on which the basic functionalities of the module are implemented. Therefore, any robot HW can be implemented in hours.

R2P exposes a [MicroROS] interface, enabling each R2P node to interact directly to any ROS node implemented on a connected computer or network.

On the first instance of Triskar2 a PC by Zotac is mounted, powered through the DCDC by Mini-box.

Triskar2 is currently under development as a base for some Robogames, the most advanced of which is presently Alien-Bot.

The Triskar2 base from the bottom, with PC support.
Retrieved from "https://airwiki.elet.polimi.it/index.php?title=Triskar2&oldid=15853"
Category: