The goal of the project is to analyze Wikipedia categories by representing them in a graph based database.

For this reasons a graph database is better to represent the structure.

Creation and further analysis of the database with igraph

Wikipedia let users download the entire site database (with all versions of all articles) or just some selections of it. We use a selection which contains the category list and articles memberships in them.

Neo4j is a graph-based database, which allow a program to create and manipulate graph structures like nodes and relationships.

In order to transfer the database in neo4j format is better save it in a file, which will be read one line at time.

After transferring the structure in a Neo4j graph is possible to create from it a Pajek file (.net) to make general analysis like described here.

Results of the analysis

We can use the tools described here

The diameter of the graph is 32. This is the maximum distance (number of nodes in the minimum path) between two nodes. These two nodes are Prehistoric life sorted by geography (A category about prehistoric animals without articles) and BMW M20 (a car).

The average distance between two nodes is 5.5568.

By analysing the graph with little Java programs written for this task we calculated the average number of categories per article is 2.68.

The article with more categories is Winston Churchill, with 70 categories. Albert Einstein has the notable number of 56 categories, too.

By applying the Tarjan's strongly connected components algorithm to the graph is possible to found 93 structures of up to 2 nodes. Each of them contains at least one cycle. Most of them are composed of two categories about the same thing, like History of the Germanic peoples and Ancient Germanic peoples, but there are also more curious cases like this one

We tried 9 algorithms to choose the category which fit best an article. After confronting the results of the automatic procedure with human made assignments, the best algorithm was choose a different weight to each edge by the traversal direction. Sizes of the macrocategories determined this way are: 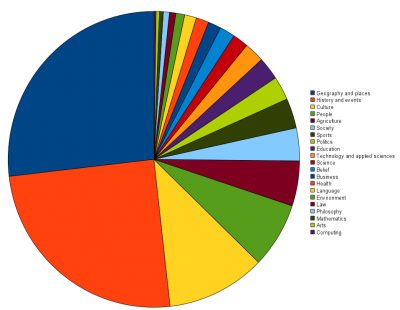