When you shot a night photo of a road, you will notice that car’s lights are often the most relevant thing of the photo. Then, if you use a longer exposure time, lights will leave amazing streaks or “trails” in the image, which are really the image of the car’s lights trajectory during the exposure. So, starting from a photo of a street, possibly busy, the aim is that of trying to compute the approximate speed of every car that is running along the road. 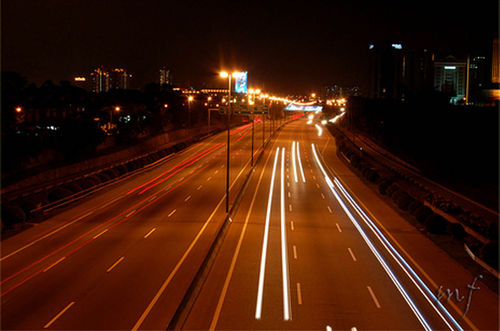 An example of a long exposure photo.

Stefano Magni - as a project for the course Computer Vision (Como), prof. Caglioti

Christian Malecore - as a project for the course Computer Vision (Como), prof. Caglioti

Matteo Albinola - User:MatteoAlbinola - as a project for the course Image Analysis and Synthesis, prof. Caglioti

Matteo Carcano - User:MatteoCarcano - as a project for the course Image Analysis and Synthesis, prof. Caglioti

The problem is to find a method in orderd to approximatively estimate the speed of every car, starting from their light streaks left in a long exposure photo.

The first part of this work is centered on a preliminary analysis of this scenario that allowed to define a very important set of assumptions on the features that a night long esposure photo must satisfy, and also a set of constraints related to the environment. Then, a deeper analysis shows a possible problem decomposition into three sub problems:

The solution merges different techniques from image analysis and others from image geometry.

The first sub problem is treated using two different approaches, one based on a technique for estimating the blur extent (very similar to a long streak), and consequently streak’s extremes, with the application of autocorrelation function (ACF) and the other that try to reach same results but using the Hough transform. Last two sub problems are solved instead with knowledge about image geometry, so working on relations between lines, angles and cross-ratios (alternatively homography).

Description and Results of Experiments

There are two different categories of images belonging to dataset:

The first category is mainly used to test quality and robustness of the speed estimation. This is an example result:

The second category is especially used to test the quality of the streaks detection and car clustering on a busy road. This is an example result:

Main problems revealed by the testing are:

From the experimental results, we notice also a set of important things that must be taken into account: