This thesis born from the challenge presented in the WCCI (Wolrd Congress on Computational Intelligence) 2008 placed in Hong Kong in June 2008, in particular from the MSPacMan Competition. PacMan is a Namco arcade game, born in the 1980, early became most famous and loved by the worldwide audience. The main difference beetween the original PacMan and the Competition's version MSPacMan is the non deterministic character of Ghost’s movement that bring the MSPacMan version more interesting in the Artificial Intelligence science than the original one. So this Thesis work is to find an AI formalism able to play the MSPacMan, controlling the agent in order to escape from Ghosts, living and score as much as he can. The main difficulties are about the non deterministic character of the Ghosts, the complexity of the maze, presenting during the level in three stages (see next figure), and the long time simulation needed by whatever Machine Learning algorithm. 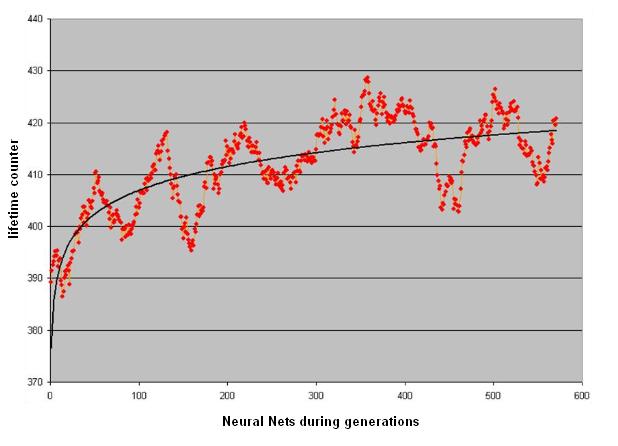 Results of these early attempts was no satisfactory, see the figure above with the graphical representation of moving average of fitness during 40 generations, and shows us that the net needs more generations to evolve and the information about the closest pill by the PacMan in order to give agent the capacity to explore the maze in the direction of remaining pills. So we did, and doing again today, other simulation with less input, a local representation of the agent, of ghosts and of the closest pill; in addition we measure the Fitness like the game score. We get better results, you can see in next figure that the process of learning able to increase the score about 1000 points, that confirm us that’s the right direction to solve the problem …. 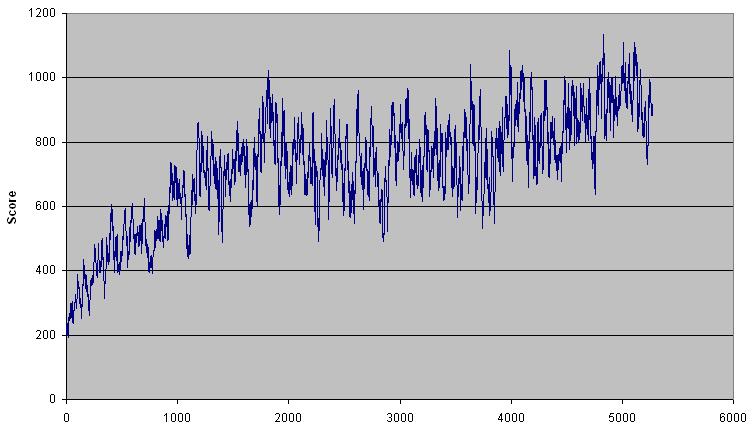