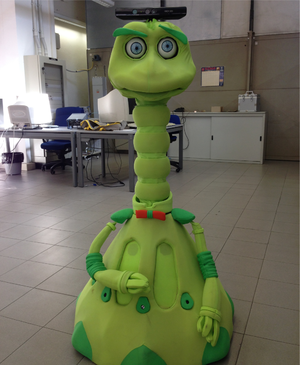 The robot was created as a project for an exhibition environment, and its purpose is to attract people's attention and bring them to a particular stand after a careful assessment of the interest of the speaker. This kind of action requires a high level of interaction with the person and it is therefore necessary to increase the human-robot experience, and that's why the robot has been equipped with a neck capable of complex movements and a series of behaviours to enable a communication with the person the robot is talking to.

The elaborate encloses a set of projects developed over time within the AIR-lab. For a complete list see E-2? - A robot for exhibitions.

The robot consists of three main sections: a mobile base, a neck and an mechanical head able to show different facial expressions. The head of the robot accommodate all the mechanical control of the eyes, eyebrows and mouth, and support the Kinect sensor, used for the artificial vision system and as navigation sensor.

The neck is designed to ensure better rigidity of the whole structure and, to increase the set of reproducible movements. This is made ​​up of 5 servomotors that provide differt degrees of freedom wich allow the robot to make even very complex movements.

All the control is achieved by using a set of ROS nodes which communicate to handle all robot's tasks.