Human social interactions are based on the correct response to social situations. If someone does not respond in an expected way, he/she is margined by the others. Thus, robots that interact with humans in everyday life places, such as home, office, classroom and public spaces, should not only accomplish their task, but also be accepted by humans, which means that they feel comfortable to interact with robots. As a consequence, social robots must have the capacity to show emotions and behave in a socially correct way. However, building robots that could accomplish their tasks and show emotion is not an easy job due to the difficulty to select the correct emotion, show the emotion in a way that could be understandable by humans, together with all the traditional problems to perform a given task. This makes crucial to find a real environment that allows focusing the research efforts on the production of effective social and emotional interaction, without the need for other abilities (e.g., emotion detection, status detection, person recognition, etc.). Several researches have suggested that theatre could be an excellent place to test social and emotional abilities [4]-[8], due to theatre constraints that make the actor know what to say, how to react, where is expected to be the objects and other actors. All of this information is given before hand in a script. However, the few works [9]-[19] that have been put robots on stage in the last decade have used theatre as an environment to create robots for entertainment, without worrying about the use theatre actor’s training theories to make the robot project emotions to the audience. TheatreBot aims at exploiting theatre constraints to build a robotic platform and software that allow the robot to be an actor in theatre and not just as prop, as currently is happening. The system and platform will be designed to allow extension to other application areas where showing emotions are important as in robot games and assistive robots. To accomplish this goal, the robot will use a relational social and social model of the world to represent its character’s feelings and belief about the world. Besides, the concept of emotional state is used to add emotional features to action performance, so obtaining a full range of possibilities to show emotional and social interaction.

Theatre is considered as lively art [1]. Thanks to theatre characteristics, constraints and actors’ lessons, it is an excellent place to test coordination and expressiveness in robots, and actors training systems [1]–[3] can inspire the development of expressive robots. People are used to think at theatre as a repetitive show, and essential points that make theatre a lively art are often forgotten[1]:

Theatre is an excellent framework to focus on specific abilities and features to produce effective social and emotional interaction, without the need for other abilities (e.g., emotion detection, status detection, person recognition, etc.), which are provided by the script and the director:

Roughly, the software architecture is compound by the following sub-systems: 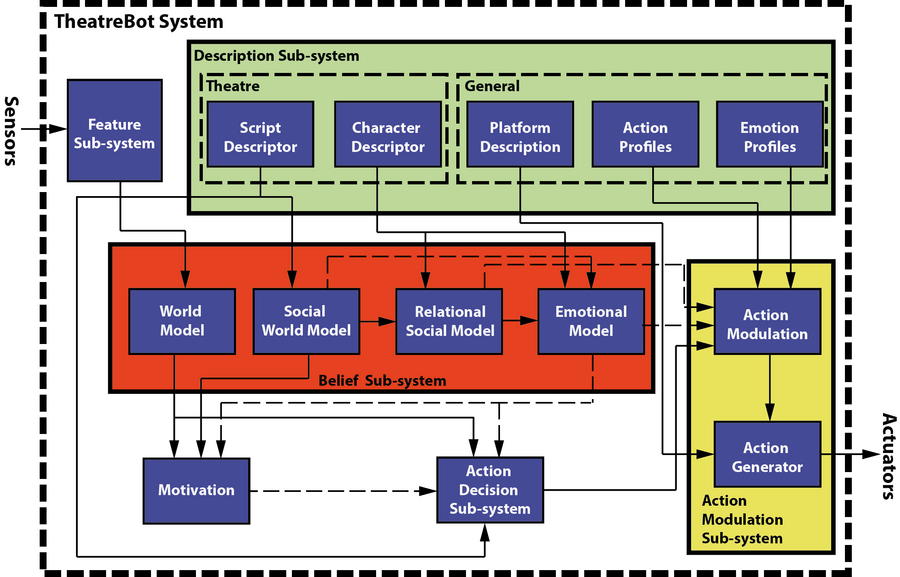 As could be seen there are two kinds of lines: continues, which represents information that are used for others modules. On the other hand the dash means that the information is not mandatory, thus the other module could used or not that information. If none of the modules accept any suggestion of others modules, then the system could be seen as traditional action decision system without any kind of emotion addition.

First Platform to test How to Show Emotions

A robotic platform has been developed to not have human-like appearance. This platform has suffered different changes through its development. The first version was built using an Arduino Mega, three metal gear motors, and one servo motor attached to a beam, as it is showed in the following image: 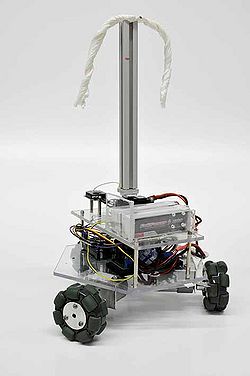 To the second version, it was added two additional servos. The three servos were used to change the shape of the robot: 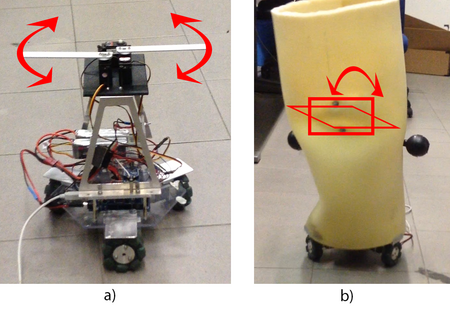 It was added an Odroid U3, in which was installed ROS. The communication between Odroid and Arduino was done through ROS Serial.

New modifications of the upper part were done to improve the emotion projection. These modifications were to remove of the second level, where all the motors were supported. Instead, it was added a motor to move forward and backward the whole level. Also, two plastic parts were used to maintain the upper shape. 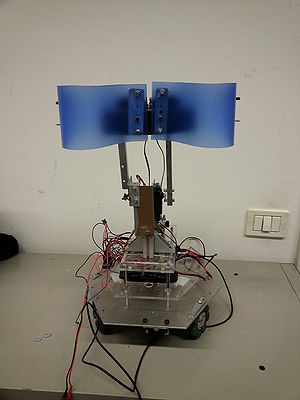 Connecting with the platform

The platform now has a wifi usb that could be configured to connect to the network. [TODO] explain how to set the network changing network file. From a computer you can have ethernet connection and wifi communication with the platform following the steps from this webpage